Busquets: “We have a lot to play for”

Busquets: “We have a lot to play for”

Sergio Busquets knows that until the Champions League is over, it would be better not to talk about the clásico. There is a lot at stake in the Panathinaikos game.

As expected, despite Panathinaikos being the topic, several reporters at the press conference tonight proffered to quiz Sergio Busquets about the Real Madrid game. The Catalan was not happy about that, and said “it is vital for us to win and seal the group, and to finish top so we can play the second leg at the Camp Nou … it would be disrespectful to talk about Monday. Not now. We have to talk about winning on Wednesday”.

Busquets went on “We are only concentrating on that. We have a job to do and we want to win against Panathinaikos, and we are in great fitness for it. All we’re worrying about no is coming top of the group”.

Busquets also insisted that Pep Guardiola and his team take every game seriously. “We go day by day and game by game. We seek a result and play our own football. I think we’ve tried hard in every game … the thing at the start of the season was that we’d played at the World Cup and so it wasn’t a typical preseason, but we’ve all gained form since then. The results show that and playing the way we do, our fitness is very important”.

Asked about the Greek champions, Busquets said “the change of manager means they’ll be very different to how they were at the Camp Nou, they play with different concepts. Cissé and Govou are their best known players.” Panathinaikos may be bottom of the table but “there are no easy games. We’ll do what we know we can do. Attack, keep, possession and look for the ball, overcome the Greek atmosphere in the stands, win the three points and seal qualification”.

As for the big win away to Almería, Busquets said “things like that can happen sometimes, but not often. We went ahead very early on, but everybody wants to beat us, and it wasn’t as easy as the score suggests”. 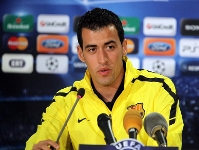 Sergio Busquets also wished all the best to his childhood friend Moisés Hurtado, who once played for Espanyol and is now at Olimpiakos, the eternal rival of Panathinaikos.