Spanish League Round Up Week 12

Spanish League Round Up Week 12

Although FCB and Madrid both scored emphatic wins ahead of next week’s game, the teams behind them enjoyed contrasting fortunes, with Seville losing to Mallorca, Espanyol and Atletico both winning and Villarreal and Valencia drawing on Saturday.

The league is beginning to take some shape after this week’s games with a group of five clubs behind the big two, followed by four or five teams who seem to have settled in mid-table and then a group who look to be heading for a season flirting with the drop.

Real Madrid saw off Bilbao’s challenge at the Bernabeu on Saturday, with a hat trick from Cristiano Ronaldo (one from a penalty and another a free kick)and although the Basques put up a fight towards the end of the first half when Llorente scored his ninth of the season, Mourinho’s team cruised past them in the second half with Sergio Ramos scoring from the spot and Ronaldo getting a brace. Earlier on Saturday evening, Valencia had drawn at Villarreal despite playing out the last few minutes with ten men following the sending off of Stakkevicius for his second yellow and Valencia’s ninth of the match to take the team’s total to 50 in the 12 league games played so far this season. Arduriz put Valencia ahead on 21 minutes and Rossi replied for the hosts on 73 with his eighth of the campaign. Villarreal stay third – seven points behind Barça, whilst Valencia are three points further behind in fifth.

Espanyol make it six out of six

Espanyol moved into fourth with a 3-0 home win over Hercules to maintain their 100% home record after six games. Two second half penalties –the first of which meant a red for Hercules’ keeper Calatayud- gave Pochettino’s team the points that take them above Valencia on goal difference. The other teams involved in the fights for UEFA spots, Atletico Madrid and Seville suffered contrasting fortunes, with Manzano losing out to his ex-team Mallorca 1-2 at the Sanchez Pijuan and Atletico Madrid winning 2-4 at the Anoeta. Seville had most of the play and seemed to have rescued the game when Luis Fabiano equalised a 36th minute Periera opener, but Webo popped up on 90 minutes to take the points and move Mallorca to eighth, two points behind Seville. Atletico are ahead of Seville on goal difference after their win over Real Sociedad which came thanks to two goals from Aguero, one more from Forlan and a late penalty from Simao.

Real join fellow Basques Bilbao and Osasuna in mid-table, with Camacho’s team maintaining their unbeaten record at the Reyno de Navarra after a 1-0 win over Sporting thanks to a second half strike from the Iranian Massoud. The defeat leaves Sporting level on points with third from bottom Malaga after a run of five games without a win. Malaga went down 3-0 at the Riazor –Deportivo’s boss Lotina has overseen a great turnaround, taking 10 from the last 12 points and he reminded everybody after the game: “a month ago we couldn’t beat anybody!”. Malaga are a point above Almeria in the bottom three, with Levante moving a point ahead of them after a 3-1 win over Racing. 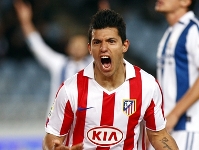