Pinto the only doubt for AlmerĒa

Pinto the only doubt for AlmerĒa

Josep Guardiola has named a 19-man squad for the trip to AlmerĒa that does not include ╔ric Abidal or Jeffren Sußrez, but does contain Josķ Manuel Pinto, Thiago Alcßntara, Andreu FontÓs and Sergi G¾mez, who all face late fitness tests.

The FC Barcelona coach called up all the players for the journey south and will decide ahead of the game who will be named in the team and on the bench. Pinto is struggling to overcome a heavy cold and did not train on Friday, instead being told to go home and rest. Depending on his progress on Saturday morning Pinto may even be replaced in the squad by young shot-stopper Oier Olßzabal.

Three Barńa B players have been included as well with defender FontÓs and Sergi being joined by midfielder Thiago in the ranks. Abidal and Jeffren have been rested by Guardiola. Abidal has a slight injury that he picked up while playing for France against England, Guardiola explained in his press conference. The trainer will have to decide on the day of the game which player will not be included in the 18-man list for the game.

Gerard Piquķ was deemed fit to travel with the squad as he trained without any problems on Friday with the rest of the squad. The central defender has overcome a hamstring strain that he felt during Spain’s encounter with Portugal in midweek that meant the was put through a recovery schedule on Thursday in training.

FontÓs, Sergi, Thiago and Oier all trained with the first team squad on Friday as Guardiola took the session alongside 17 regulars. The workout focused on strategy and tactics that will be employed against AlmerĒa.

Gaby Milito continued his recuperation from a leg injury as he worked in the club gymnasium at the Ciutat Esportiva Joan Gamper. 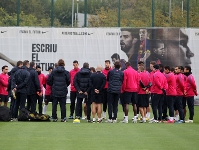 * Depending on his progress a decision about whether he travels as part of the squad will be made before the flight. If he is not declared fit then Oier Olßzalbal will be included instead.