Draw with no seeds and quality teams

Draw with no seeds and quality teams

16 teams, 14 from the first division, and just two from the second go into the hat for Thursday’s Copa del Rey draw, which will be held on Thursday at 13.00 at the headquarters of the Federación Espańola de Futbol in Las Rozas (Madrid).

There are no seeds, so FC Barcelona could be drawn against any of the 15 teams, which range from Real Madrid to second division Betis and Cordoba.

Draw for rest of competition

Not only will teams know who they will meet in the next round, but the entire bracket will be decided by this draw, right through to the final. The round of 16 matches will be played on December 22 and January 5, the quarter finals on January 12 and 19, and the semi finals on January 26 and February 2. That means all teams that reach the semis will play two games a week for the whole of January. 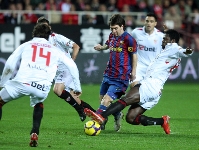 The only top flight absentees are Racing Santander, Zaragoza, Sporting Gijon, Hercules, Real Sociedad and Osasuna. There are some enticing potential match-ups, including Barça v Real Madrid, which has not happened in the cup since 1996/97, when Mourinho was a member of staff at FCB, or Barça v Sevilla, which would give FCB the chance to avenge defeat last year, or Barça v Espanyol, which would mean two consecutive city derbies over the Christmas period.