Dutch Speed and Skill on the Wing

Dutch Speed and Skill on the Wing

Ibrahim Afellay, 24, is a skilful and fast winger who has been thrilling the PSV crowds for quite a few years now and has won everything in Holland thanks to his straight forward attacking approach and his good shooting.

Born on 2 April 1986 in Utrecht. Afellay, who is of Moroccan origin, learnt his trade at USV Elinwijk and is generally recognised as one of Holland’s top young talents. He has been one of PSV’S biggest stars in recent years and as a winger can boast many virtues, including pace and skill. His crossing is very accurate from either wing and his skill allows him to easily move inside.

He has a great long distance shot with either foot and has scored a number of spectacular long range efforts in the Dutch league. 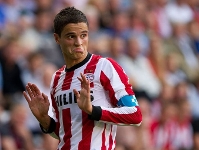 Although he is only 24, Afellay has plenty of experience and has played more than 23 games in each of his last five seasons at PSV. He made his debut seven seasons ago when he was just 17 and since then has won winners medals in the Dutch Cup and Super Cup, as well as four League titles and well as figuring in the Champions League and Europa Cup.

Afellay, whose contract with PSV finishes in June 2011, has also played for the full Dutch international team, being part of the squads for the 2008 European Championships and 2010 World Cup, although he has still to really make his mark for Holland. 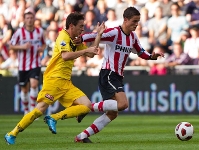