“The most important thing is for Barça to get goals, not me"

Villa: “The most important thing is for Barça to get goals, not me”

David Villa knows that at Barça, the team should always be put ahead of personal aims, and does not feel he should be judged on how many goals he scores.

“Barça did not sign me to be the top scorer, but to help make Barça better”, he said.

The FC Barcelona striker added that “the most important thing is for Barça to get goals, not me”, and is not gauging himself by his personal stats. 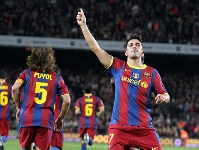 Villa scored a brace against Sevilla, but that was not enough to satisfy his ambitions. “Nothing I do is enough. I scored two goals the other day but I’d liked it to have been three or four. The team won 5-0, but I’d have preferred it to have been 6-0 o 7-0. I always want more, but I’m happy enough with the job I’m doing so far”, he said.

Defending on the wing 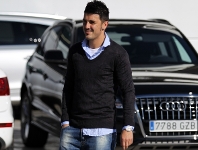 Villa claims to be comfortable whether he is played on the left, right or up front. “I like all the positions I’ve been played in” he said, although he admits he does find it difficult to defend on the left. “Not just here, but in the World Cup as well. But I have learned a lot about defending from Del Bosque and Guardiola”, he said.

The Asturian was also quizzed on fitness issues. “We all had a tough, demanding game the other day, but it ended well against Copenhagen and I hit the post. We’re not lacking freshness. Although we didn’t have a preseason like other years, I don’t think we’re really noticing that right now”. 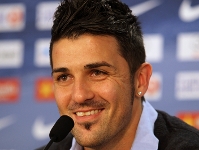 David Villa knows the game with Madrid at the end of the month is an important one, by which time he hopes FCB will have already caught their main rival in the Liga table. “First we have to beat Getafe, because all our rivals are winning at the moment and there is still one team above us. Of course, if we beat Madrid we gain three points on them, but who’s to say we can’t make up those points in other matches?”