Jeffren back on the training pitch

Jeffren back on the training pitch

The squad were back in training this morning as they prepared for Sunday’s game against Getafe. Jefrren, who has been out since the Cup tie with Ceuta, was back on the training ground for the first time since his injury. 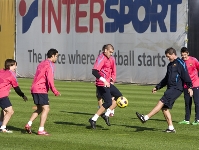 The players enjoyed a day off on Wednesday following the 1-1 draw with Copenhagen, but were back under Josep Guardiola’s orders at the Ciutat Esportiva this morning, preparing for their next league encounter, this Sunday at Getafe. 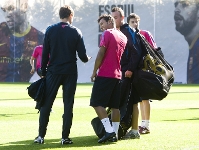 Jeffren, who suffered a back injury against Ceuta on 26th October, was originally ruled out for four weeks and today he began his recovery on the training pitch, working with the first team physio and even doing a little ball work.

Xavi, Messi, Piqué and Iniesta in the gym

Three from the B team 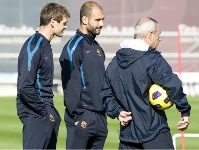 The B team representatives at the session today were Jonathan Soriano, Martí Riverola and Thiago.

Following the usual warm up and ball control exercises, the group split into two groups: one made up of the players who featured in Denmark, who did some gentle jogging, whilst the rest did some circuit training. 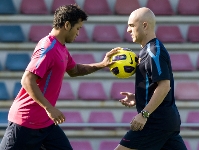 The players will be back at the Ciutat Esportiva Joan Gamper tomorrow at 11.00 for a session which will be open for the first 15 minutes. David Villa will speak to the media after the session.