If Seville, Valencia, Atletico and maybe Villarreal were supposed to threaten the big two in La Liga this season, this weekend’s results have put such hopes very much into context as none of them, nor indeed fifth placed Espanyol, managed a win.

Whilst Barça and Real Madrid, who won 1-3 at Hercules, continue to step on the gas up front, the challenge from the other supposed big clubs stuttered to a halt with Atletico Madrid and Valencia both being held to home draws, Villarreal failing to beat Sporting in Gijon and Seville, well , Seville were just taken apart at the Nou Camp on Saturday. Even Espanyol, who’d gone into their game against bottom club Deportivo with the chance of taking a Champions League spot, failed miserably, going down 3-0 at the Riazor.

Barça won three of their four league games in October, with only the draw against Mallorca not ending in the three points coming to the Nou Camp whilst Madrid won all four . In the same period, Villarreal drew two and won two, Seville lost two and won two, Valencia won just once, drawing once and losing two games, whilst Atletico Madrid lost two games, drew one and won one. Espanyol’s defeat in La Coruńa was their second in October, though they did win the other two games they played last month. Real Madrid are now top on 23 points, just a point ahead of Barça, with Villarreal on 20, Espanyol 17 and Seville and Atletico Madrid way back on 14 points.

Lanzaro on target at both ends

Real Madrid came back from an early Trezeguet strike –the Frenchman’s fifth for Hercules in the league this season – with goals from Di Maria and two from Ronaldo, who leads the goalscorers table with 11, to take the points in Alicante. Valencia also played on Saturday, but again disappointed with a 1-1 draw against then bottom club Zaragoza, who’ve still yet to record a win and played the last 30 minutes with just 10 men. Zaragoza’s Lanzaro was hero and villain for his team, putting them ahead after just three minutes, then heading past his own keeper for Valencia’s equaliser a minute before half time.

Villarreal played on Sunday and the pressure of knowing Barça and Madrid had won proved too much for them as they could only draw 1-1 against Sporting. Both goals came from penalties, with Diego Castro putting the hosts one up on 68 minutes and Rossi scoring a last gasp injury time equaliser after Villarreal had been reduced to 10 men following Gonzalo’s second yellow on 76 minutes. Atletico Madrid were also unable to do better than take a point, held 1-1 at home by Almeria. Kun Aguero put Atletico ahead on the half hour, but Almeria drew level on half time with a goal from Piatti. With a trip to the Bernabeu for the Madrid derby next week, Quique Sanchez’s team are in real danger of slipping out of the European places.

Espanyol continue to frustrate their fans on the road and although hopes had been lifted by the win in Mallorca, Sunday’s 3-0 defeat to then bottom club Deportivo was a sobering experience. Deportivo had only managed three goals in the previous eight league games, but they saw off Espanyol with Adrian Lopez, Lopo and Colotto giving them their first win of the season and the hope that they may fight their way out of the relegation spots.

Racing did manage to get out of the bottom three after an impressive 4-1 thrashing of Osasuna with two goals from the Swedish striker Rosenberg, whilst Malaga dropped into third from bottom, level with Deportivo on seven points, after a home defeat to Real Sociedad. This was the Basques’ first away win of the season and rounded off a successful month in which they’ve taken nine points from twelve to haul themselves up into mid-table. 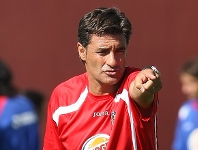 Barça’s next league opponents, Getafe, were thoroughly outplayed in San Mames on Sunday and went down 3-0. Iraola, San Jose and Gabilondo scored for Bilbao who are now eighth in the table, a point behind Seville and Atletico Madrid. Getafe are level on points with Bilbao, with games against Barça, Seville and Valencia ahead of them in November.