Speaking after training this morning, Xavi explained that he’d come off against Seville feeling: “very happy” with his tendons and with a tough November ahead, that he was: “optimistic about taking part in every game”.

After missing the games against Zaragoza and Ceuta, Xavi was back in the starting line up against Seville and reckons: “I felt fine – I was very happy”, and even believes he could have got through the whole 90 minutes if needed. 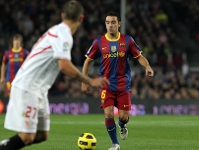 Although he admitted there is still some pain in his ankle, after the win over Seville the World Cup winner insisted: “I felt nearly 100% and I hope to be available for every game – we’ll have to see how the injury progresses”. 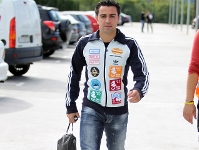 Xavi was also well aware of what the big win can do for team spirit and the fans’ view of the team: “we needed a game like that at home – we saw the Barça that everybody wants”. Dismissing the doubts that surrounded the team at the start of the campaign, Xavi was adamant: “we are at a very high level, just like we were in other seasons. The only difference has been that we haven’t had a result like this so far, we have tended to go for the result rather than the performance”. 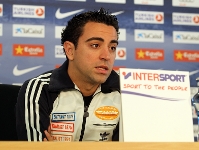 The squad fly off to Copenhagen on Monday and Xavi is well aware that a win on Tuesday could virtually ensure classification. “that would mean we could rest some players , but it won’t be easy to beat Copenhagen”.

Xavi is one of the favourites for the FIFA Balon D’or award and although he accepted: “it’s an honour to be nominated”, he insisted” the best player now and over the last few years has been Leo Messi . He’s a level above the rest of us”. 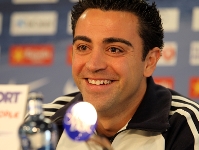 Xavi fielded questions about Pinto, Mourinho and Villa, firstly expressing his conviction that the keeper had been unlucky to be handed a two match suspension: “what happens on the pitch should stay on the pitch”. As to the Real Madrid boss, Xavi insisted: “we are not going to get into a slanging match. Our only war is on the pitch”.

Finally, with Villa’s brace against Seville calming everybody’s nerves, Xavi made it clear that: “he’s looking fine. All he needed was the goals he got against Seville; he’s been participating and creating chances for us all season”.