Barça showed all heir attacking strength with the five goals against Seville, but it was also the team’s fourth clean sheet on the run, as Guardiola said after the game: “we defend by attacking!”.

Below are some of the match stats from the game:

► Seville only had three shots during the game, with just one on target, whilst Barça had eighteen, with eight on target.

► At the back, Pique won eighteen tackles, whilst no other player on the pitch made more than ten.

► Barça made twenty five crosses to Seville’s seven and a total of 723 passes to the visitor’s 283: another stat that shows Barça’s total domination.

► Xavi was only on the pitch for an hour and so it was Busquets who was the most active Barça player with 124 interventions.

► The game was the fourth on the run in which the team have kept a clean sheet, with Copenhagen, Zaragoza and Ceuta also unable to break the Barça defence. That is the best run of the season......so far!

► It was also the team’s fifth win on the trot in all competitions, a run which began with the win against Valencia. 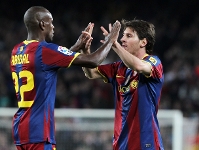 ► Messi has scored 14 goals in the 12 games the team have played so far this year, with 10 in the first half and four after the break.

► It was the fourth brace of the season for Messi, who’s scored twice on three occasions in the last 10 days.

► In contrast, it was Villa’s first two goal haul as a Barça player and his twelfth against Seville.

► Alves bagged his second goal of the season following his strike against Panathinaikos in the 5-1 win at the Nou Camp, but it was his first in the league and his first against his ex-team.

► Piqué is still sat on four yellows in the league –just one short of a one-match suspension. 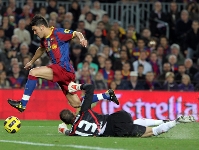 Pedro is the Barça player who’s played in most games so far this season, having figured in every match since the second leg of the Spanish Super Cup. Since that match, he’s figured in all of Barça’s 14 games. Behind Pedro is Javier Mascherano, who’s been involved in every game since the Atletico Bilbao match on September 25th.