Milito in squad for Danish trip

Milito in squad for Danish trip

Guardiola can count on Milito for Tuesday’s game against Copenhagen after the Argentinean was given the medical okay to play this morning. The squad to travel to Denmark will be made up of 19 players, 17 from the first team and Thiago and Mińo.

The players who featured in last night’s win over Seville had a gentle training session this morning, as the focus switched from La Liga to Champions League action and the trip to Copenhagen on Monday for Tuesday’s game.

With Milito, but without Pinto 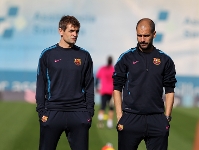 Milito was finally not used for the Seville game, but he is finally back from the injury he picked up in training on October 18th and will be making the trip alongside B team keeper who comes in for the suspended Pinto, Thiago and the other 16 available first team squad members. Jeffren is the only absentee for Guardiola aims to take a decisive step towards classification with a win in the Danish capital. 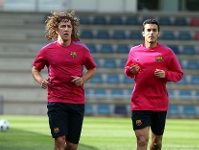 Five of the players who put on such a show against Seville last night–Messi, Puyol, Abidal, Pedro and Alves – trained this morning with the rest of the squad, whilst the others - Valdés, Iniesta, Xavi, Villa, Piqué and Sergio- worked out in the gym.

Planas, Víctor Vázquez, Ilie, Riverola, Oier and Thiago from Barça B also joined in the session. 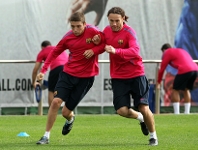 Barça set out for Copenhagen this Monday at 9.30, when they leave the Nou Camp for the airport. Their flight is due to land at 13-10 and the squad will train at the Parken Stadium at 19.00.