Villa: “the goals are for the fans”

Villa: “the goals are for the fans”

David Villa bagged two lovely goals in the five nil win over Seville tonight and put an end to his mini goal drought in front of the fans who’ve never stopped supporting him.

Villa scored the second and fifth goals and after the game he admitted to being “happy” with the win, insisting that Guardiola and his teammates “have always given me their support”, whilst stressing: “if we are winning, I’m fine, tonight I scored two goals, but next week maybe I’ll contribute something else”. 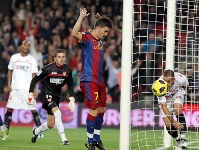 Villa reckoned: “Seville are a tough team to play, but we came out very strong. With the sending off of Konko, the game was virtually over”. Villa scored both of his goals with his left foot, but explained: “that’s nothing strange –it’s my weaker foot, but I’ve always scored with it too”.

The Spanish striker also commented on the supporters who’d travelled to see the game from his home town of Tuilla in Asturias: “the goals were for all the Nou Camp fans and for all the people from my home town who’d come to see me. They travelled a long way and I’m very grateful to them. I hope that they take advantage of the holiday weekend to visit the city – I’m sure they’ll love it”.

Below are some of the other players’ post-match comments: 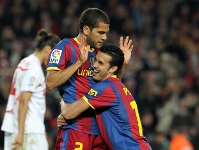 “We came out really fired up – it was important to win”.
“When we play like that, it’s going to be hard for anybody to beat us”.
“I’ve not scored yet, but that doesn’t matter – they’ll come”.

“There have been other games when we’ve played well at times, but tonight we were great for the full 90 minutes”.
“Nobody has had any doubts about David Villa”. 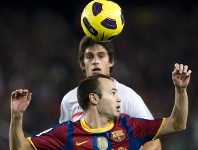 “Were not better than we were before because we’ve won 5-0, but we are on the right track”.
“We’re all very happy for Villa. It was a matter of time till he scored and I’m sure it’s the start of a good run for him”.
“Tuesday’s game is important for our future and we have to play very well”.

“We did a great job today. It was a well deserved win”.

“The most important thing is to keep playing at this level and keep on chasing the team above us”.
“I was quick to take advantage for my goal, but maybe a bit lucky too”. 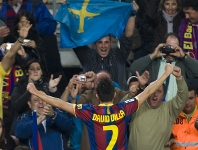 Back in the morning

There’ll be no rest for the squad, who are due back at the Ciutat Esportiva Joan Gamper at 11.00 on Sunday for training ahead of Tuesday’s game against Copenhagen. The session will be held behind closed doors and Xavi will speak to the press afterwards.