Squad all set to receive Seville

Squad all set to receive Seville

With just Jeffren out injured, Pep Guardiola can call on a virtually complete squad for tonight’s game against Seville and his players put in a final training session at the Nou Camp this lunchtime ahead of the game.

The players reported to the Stadium at 11.30 and were out on the pitch training at midday in preparation for the clash with Manzano’s Seville which kicks off at 22.00. 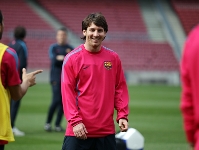 The 18 first team squad players were again joined by Thiago from the B team who has been under Guardiola’s orders for the last few days. Jeffren has been ruled out for the next few games with a back injury he picked up against Ceuta in midweek. 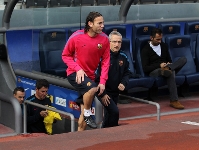 Xavi, who was rested against Zaragoza and Ceuta, could be back in the team tonight – Guardiola reckons: “he’s fine, better, but we don’t know how his tendons will hold up to 80 or 90 minutes”. Meanwhile, Milito was back with the rest of the squad and should be available for the game.

Lunch and off home

The players ate together in the stadium after training, before heading home to return at 20.30 tonight. 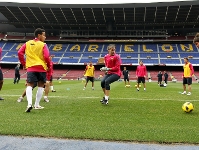 It’s a bank holiday weekend in Barcelona and there is plenty of atmosphere surrounding the game with a lot of fans coming in early to catch a glimpse of their heroes as they drove out of the stadium this lunchtime.