Pep Guardiola is relishing the visit of Sevilla this weekend as FC Barcelona return to league action and looked ahead to the idea of playing the clásico against Real Madrid on a Monday evening.

This weekend a rejuvenated Sevilla team head to north to Camp Nou and the Blaugrana boss admitted that it would be a tough test for his players as new coach Gregorio Manzano has added his influence to the Andalucian outfit. "We know Sevilla because we have played them many times," he explained. "Now they play differently from last season as the trainer changes to how Mallorca did. Sevilla have great players and have a great coach. They are one of the big clubs and this will be a fabulous match.

"Previous meetings mean nothing and are no indication of what could happen," he added. "We will see what they have to offer and how we play."

Debate is raging about a proposal to move Barça's encounter with Real Madrid a Monday but Guardiola believes it is not for him to decide. "I feel that nobody will be happy," he said. "What myself or the club think is relative because the television people will decide. The one that pays is in control. It would not be normal to play on a Monday, but the stadium would be full and everyone would want to see it on television too."

Guardiola is not thinking about the visit of Madrid yet, however. "There are seven games before then, which is a lot," he said. "Madrid is not my concern not. Before that we have Sevilla, Copenhagen, Getafe..." 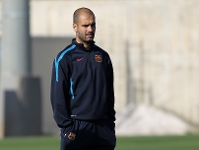 Xavi Hernández is set to return to action and Guardiola is delighted. "He is good, much better," the coach commented. "But we do not know how his tendons will react to 80 or 90 minutes. The one thing is though is that he is a lot better. We know that the injury has gone and we will see how he is during matches." Guardiola was also pleased to have the chance rest a few first-team regulars for the Copa del Rey against Ceuta in midweek. "We maintain a good tone thoughout the year and they were rested because they have played a lot of games both with their legs and in their heads."

José Manuel Pinto has been suspended by UEFA for whistling during Barça's game against Copenhagen and Guardiola remained philosophical. "We have not been given the reason yet and when I have it I will give my opinion," he explained. "If they are right we will accept that and if not then we will see." Asked about Maxwell the trainer added: "He was a great signing by Txiki (Begiristain) and the club. He has always played very going forward and defensively."

Youth team players have featured heavily throughout Guardiola's reign and more could be given first-team experience. "It is a possibility and we working on that," the coach said. "We are talking to Luis Enrique, but nothing is determined." 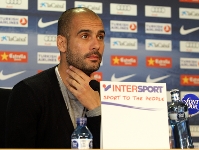 On links to Manchester United and Sir Alex Ferguson this week Víctor Valdés said he could not imagine the club without the coach. "This club is over 100 years old and still exists and will continue to exist for 100 more," Pep Guardiola said on Friday. "It existed before me and will continue to do so for many years after me."