All eyes on Sevilla

All eyes on Sevilla

The focus was on the visit of Sevilla as 18 FC Barcelona players were joined by Thiago Alcántara for Friday's training session at the club's Ciutat Esportiva training complex.

After the Copa del Rey commitment in midweek all eyes are now firmly back on the league and the challenge posed by the game against one of the division's strongest teams. 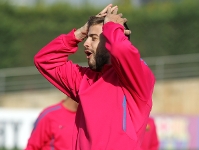 All the first-team squad was present apart from Jeffren Suárez on pitch number 7 at the centre in Sant Joan Despí and young Thiago continued his education by working with the experienced professionals once again. After the win against Ceuta on Tuesday the mood in the camp remains high and coach Pep Guardiola will be buoyed to have so few injuries to concern him.

Xavi Hernández and Gabriel Milito were both back with the squad again on Friday having finished their individual recovery programmes earlier in the week and neither showed any signs of the knocks that have seen them miss recent games.

Víctor Valdés returned to training with the squad too as he participated in the warm-up routines and ball games that precede every session. The players then split into two groups and played a game with the focus on retaining possession for as long as possible. 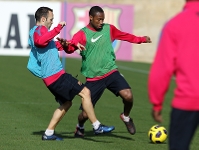 FC Barcelona will train on the day that they play Sevilla with coach Pep Guardiola organising a behind-closed-doors session in Camp Nou at 12:00. The Blaugrana then play in the late kick off encounter at 22:00.