José Manuel Pinto has been suspended for two Champions League matches by UEFA for an incident in the match against FC Copenhagen and Barça are now planning to appeal to the Control and Disciplinary Committee.

The Andalucian goalkeeper has been penalised for a controversial moment in the 26th minute of the Blaugrana’s triumph over the Danish side last week. Copenhagen’s Cesar Santin stopped running for the ball when he was clearly not offside because he thought he heard the referee’s whistle.

Instead, it was Pinto that whistled and UEFA have now suspended him for the incident. Copenhagen was his first Champions League game for FC Barcelona and he kept a clean sheet in a 2-0 win in Camp Nou. 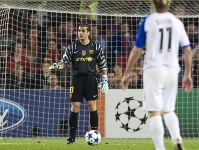