Bojan Krkic wore the captain’s armband in an official match for the first time against Ceuta, but this was just one of the interesting bits of trivia associated to last night’s Copa del Rey opener.

- It wasn’t actually the very first time Bojan has been captain. He was the name picked for the friendly in Oslo against Valerenga, the first Barça game of 2010/11.

- Bojan shot the most times against Ceuta: 6-5.

- In Ceuta, Maxwell scored his first official goal for Barça. The Brazilian full back also supplied the assist for Pedro to make it 2-0. 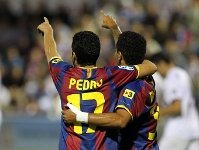 - The Canary Islander scored his second goal of the season. His first was against Panathinaikos in the Champions League.

- The game was fast flowing, and the visitors didn’t even commit a foul until the 41st minute.

- Barça only made eight fouls in the whole game. Seven of those were shared by Mascherano (4) and Adriano (3).

- Adriano Correia was the player that won the ball balls in the match: 10.

- Fontŕs and Bartra formed an unprecedented centre of defence. These two players are doing well in the reserves and on Tuesday showed they the position is well covered for the future.

- This was the seventh time that Barça have practically settled a tie against their first round cup opposition in the away leg. Zamora (1-3), Badalona (1-2), Alcoiŕ (0-3), Benidorm (0-1), Cultural Leonesa (0-2) and Ceuta (0-2) have been their seven most recent victims. 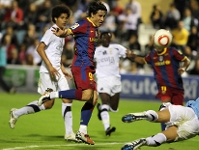