“We lacked a third goal”

“We lacked a third goal”

Pep Guardiola was proud of his players after seeing them secure a 0-2 win against Ceuta in Copa del Rey on Tuesday, but did lament that his side were unable to find a third goal on the night.

The FC Barcelona coach admitted that he was pleased, but was keen to score another in order to put the tie beyond the reach of the Segunda B side ahead of the second leg. Guardiola wanted his team to take a serious approach and they did just that as they dominated proceedings and won thanks to goals from Maxwell and Pedro.

“The tie is still a bit open,” Guardiola said of the two-goal cushion. “We are lacking a goal that would have finished off the tie. I think that we missed a chance to find a third and close it up. We taken an important step though, but it is always vital to remain prudent. If we can play with the same intensity at home then we should go through. One has to remember though that football can be full of surprises.”

“The youth team players are capable of playing at the highest level,” the trainer said when asked about the youngsters’ displays. “I want to congratulate them. It is never easy to play in a first-team match. We know then and we knew what they would bring and give us. I am very pleased with the way that they played.”

Guardiola was wary of the threat that Ceuta could have posed his side and did not underestimate them. “There are aspects of teams like Ceuta such as their speed moving out or the build-up,” he explained. “With that we played at a good level and we were able to control things. We had to focus in defence and attack and we did that. We have come away with a goof result.”

On Bojan’s performance up front Guardiola added: “He knows that while he continues to try that hard everything will be fine. He has a lot natural ability and will continue to do what he knows how to.” 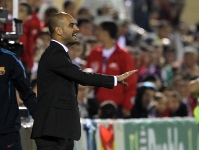 Jeffren Suárez is set to miss a month after dislocating his shoulder and Pep Guardiola was not pleased. “The injury is the bad news of the day,” the coach said. “The truth is that he was giving us a lot. He is a highly disciplined and hard-working player. They have told me that it is a very painful injury. He was just back and feeling good again and so it is a shame.”