Jeffren ruled out for four weeks

Jeffren ruled out for four weeks

Jeffren Suárez has been ruled out for four weeks after tests revealed the extent of the shoulder injury that he sustained in the Copa del Rey tie against Ceuta on Tuesday. 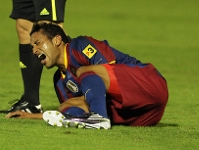 On the half-hour mark during the 0-2 triumph the young forward fell awkwardly and damaged his shoulder. He was taken to the Hospital Universitario in Ceuta and it was found that he had dislocated the acromioclavicular joint.

The medics surveyed the outcome of the tests and then revealed that they expect Jeffren to be unable to play again for at least four weeks while he recovers from the injury.

At the start of September Jeffren missed several games after picking up a muscle injury in his left leg. 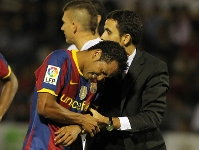