FC Barcelona’s squad have landed in Ceuta after their unique trip by helicopter and they were met by around 200 people while another large group then welcomed them as they arrived at their hotel ahead of the Copa del Rey encounter.

The Blaugrana are preparing to play Ceuta for the first time in ten years and their visit to the area has caused a stir with fans celebrating the team’s arrival. Pep Guardiola and his players arrived in style as they flew across the water from the Spanish mainland in a helicopter. 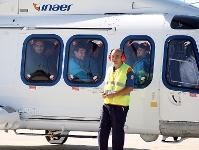 Photographers were on at the landing pad to record the faces of the Barēa stars as they touched down in the aircraft that has caused numerous headlines in the build-up. With each helicopter having between 12 and 14 seats José Manuel Pinto, Adriano, Carles Puyol ,Éric Abidal, Maxwell, Javier Mascherano, Seydou Keita, Mińo, Guardiola and Tito Vilanova flew in one while Bojan Krkic, Pedro, Jeffren, Marc Bartra, Fontąs, Thiago, Jonathan Dos Santos and Nolito flew in the second. 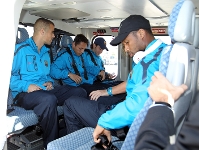 After waiting for half an hour at Mįlaga airport the players boarded the choppers and enjoyed a seamless flight across the Mediterranean before being greeted in style in Ceuta. The squad disembarked and then headed to their hotel base for the day, where another set of supporters were on hand to give them a warm welcome. 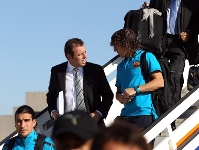 It will be a long day for everyone involved as the game kicks off at 22:00. The party left Camp Nou at 09:15 on the coach to head to the airport and the charter flight flew them down to Mįlaga. President Sandro Rosell has also travelled along with directors Josep Ramon Vidal-Abarca and Susana Monje and sporting director Andoni Zubizarreta. 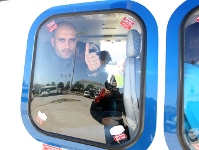 The FC Barcelona squad is spending the day at the hotel Parador La Muralla before heading to the Alfonso Murube stadium an hour before kick off.