Spanish League Round Up Week 8

Spanish League Round Up Week 8

Barça and Real Madrid kept up their duel at the top of the table, with Mourinho’s team beating Racing Santander 6-1 on Saturday. Villarreal are staying in the race after their 2-0 win over Atletico, whilst Valencia suffered their second defeat.

Espanyol also maintained their good start to the season by beating Levante 2-1 and lie fifth, just a point behind Valencia, with Seville a further point behind. With Deportivo playing on Monday, Zaragoza’s defeat means they are already four points adrift from the fourth from bottom team.

Goals going in at the Bernabeu

Real Madrid’s early season problems with scoring seem to have been overcome and Cristiano Ronaldo bagged four goals in Saturday’s 6-1 win over Racing Santander, to make it 16 goals in their last three La Liga games. The win keeps Madrid at the top, a point ahead of Barça and Villarreal, who beat Atletico Madrid with two goals from Cani and Rossi to post their best ever start to a season –a total contrast to this stage last year when they’d won just one game. Valencia rounded off a disappointing week by losing 1-2 to Mallorca with two goals from Castro sending Emery’s team to their second defeat in a week. The Valencia boss admitted after the game: “the manager got it wrong tonight and the team played badly “.

Barça’s city neighbours kept up their great start to the season, with a 2-1 win over Levante to make it four wins from four at home so far. Datalo and Callejon got the goals for Espanyol, with Stuani replying for Levante, who played the last half hour with 10 men after Xisco Nadal was sent off. Ahead of next week’s visit to the Nou Camp, Seville pulled off a thrilling 4-3 win over Bilbao. Luis Fabiano (2) and Kanoute from the spot had put the home team three up before Fernando saw his second yellow to leave them with 10 men and the Basques struck back with two goals from Fernando Llorente, who’s now scored six so far this season. Just as it looked as if Seville could throw their lead away, Kanoute put away another penalty on 80 minutes, before an injury time strike from Gabilondo rounded off the scoring.

Getafe get it right

Getafe’s 3-0 win over Sporting took them up to seventh and calmed the nerves after two defeats earlier in the week, whilst for the Gijon team the defeat leaves them just a point above the relegation spots. Zaragoza. Deportivo (with a game less) and Racing fill those places after Osasuna lifted themselves clear with a convincing 3-0 win over Malaga. The Basque team’s Iranian duo Nekounam and Masoud were on target in the first half, with Aranda wrapping it up with the third just before the hour. The defeat leaves Malaga fourth from bottom, level on seven points with Racing and Almeria, who again dominated, but needed a last minute equaliser to take a point in their 1-1 home draw with Hercules. 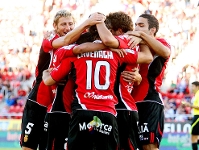 Points in demand in San Sebastian

There’s a desperate need for points for both teams when Real Sociead entertain Deportivo at Anoeta tonight. Deportivo are second from bottom, just one point ahead of Zaragoza, whilst Real are level on points with third from bottom Racing. It’s the first of three six-pointers for the Basques, who face Malaga and Racing in their next two matches.