"It’s the most dangerous game of the season"

Guardiola: "it’s the most dangerous game of the season"

Pep Guardiola is not taking anything for granted ahead of Tuesday’s cup game against third division Ceuta and insisted today: “it may not be the most important game of the season, but it is the most dangerous”.

Barça begin their campaign to regain the Spanish Cup when they travel to the North African enclave of Ceuta on Tuesday and Guardiola commented: “It’s not a chore at all - I’m looking forward to the game, When you play a team you don’t know, you always pick up something new”.

This is Guardiola’s third Spanish Cup campaign as manager and he’s well aware of how difficult these first round games can be. Referring to the games against Benidorm and Cultural Leonesa, he admitted: “the first round is dangerous and there’s a lot of potential for a slip up”, adding, “it may not be the most important game of the season, but it is the most dangerous”.

Confidence in the youngsters

The boss has picked six B team players for the trip, but he made it clear: “I have every confidence in the team I’m taking. It’s the perfect game for this type of player. We need some fresh legs and the lads I’m taking know all about these third division teams and know how tough it can be to go there and win”. 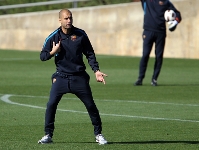 Guardiola responded to the Ceuta President’s remarks that he’d shown “a lack of sensibility” by not taking more of his World Cup Winners for the game, by explaining: “it was never our intention to show a lack of respect to anybody, especially in Ceuta where I know we have so many fans. However, we are all a part of Barça and it’s me as manager who has to decide who I pick. The players who are staying behind have been involved in a lot of games and not had much time to train. They are not staying behind to rest, but to get some training in”. 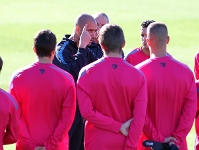 Guardiola also defending his Brazilian full back Dani Alves after accusations that he’d been play acting in order to provoke Ponzio’s red card last Saturday: “everybody has a different temperament and Alves can be a bit hot blooded at times, but he always behaves within the limits of good sportsmanship. If things happened that weren’t right, we’d be the first to tell him”.

Guardiola commented on the moment during the Copenhagen game when the visitors’ forward pulled up when free on goal, believing he’d been blown off side after Pinto whistled : “in order to call his defenders back – something he frequently does, but you can’t say that he was to blame”.