Ten first team players and six from Barça B will make the trip to Ceuta on Tuesday as Barça open their Spanish Cup campaign. The Cup rules state that the squad must be 16 strong and a maximum of six non-first team players can be named.

Training ahead of the tie 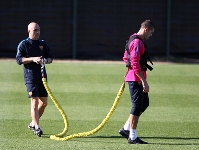 The squad for the Ceuta game, with the exception of Pinto who had the club’s permission to miss the session for family reasons, trained at the Ciutat Esportiva Joan Gamper this morning. The session was focussed on tomorrow’s game with Guardiola demanding maximum concentration in a clear sign that he is taking the tie very seriously.

In addition, Valdes came along and worked out with a coach, before joining the rest of the group, whilst Xavi and Milito continued with their own recovery programmes. 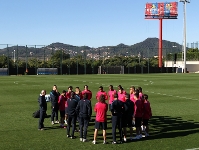 The trip to Ceuta will be unusual for the team, who will fly to Malaga, before taking a helicopter flight over into the African continent. The squad are due to touch down in Ceuta at 12.30.