Three games in next eight days

Three games in next eight days

Barça start a busy eight days on Monday, with their cup debut set for Tuesday in Ceuta, a home league game against Seville on Saturday and a trip to Denmark to play Copenhagen the following Tuesday.

Cup, League and Champions League are all on the agenda over the next week or so, as Guardiola’s team gird themselves up for challenging games in all three competitions with training sessions every day.

On Monday the team will report to the Ciutat Esportiva Joan Gamper at 11.00 to prepare Tuesday’s Cup game, with Carles Puyol coming back after his rest day on Sunday, but the other seven players given a rest, not due till the day after.

A different kind of journey

The team will set out for Ceuta at 9.15 on Tuesday morning for a trip in plane and, for the first time in the club’s history, helicopter. Players not travelling for the game are due to train at 11.00, and on Wednesday at the same time, whilst the players who did travel to Ceuta get a day off with all the squad due to train together on Thursday and Friday morning at 11.00 at the Ciutat Esportiva Joan Gamper.

As has become normal practice under Pep for match days, the squad will train behind closed doors at the Nou Camp at midday, before kicking off against Seville at 22.00. Sunday will see the players turn their attention to European football again as they come in to train at 12.00 to prepare for the Copenhagen game. 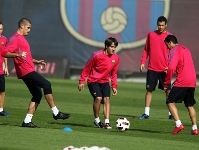 Trip to Denmark on Monday

The squad will meet up at the stadium for breakfast and at 9.30 leave for Denmark ahead of Tuesday night’s Champions League game against Copenhagen.