Plenty of B team players in training

Plenty of B team players in training

After their win in Zaragoza, the squad were back in training this morning in a session in which thirteen B team players took part.

With Saturday night’s win under their belts, the squad switch their focus onto Tuesday’s trip to Ceuta in the Cup, with a training session behind closed doors at the Ciutat Esportiva Joan Gamper at 11-00 this morning. 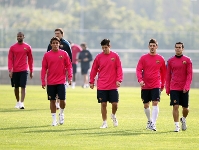 One of the most important elements of this morning’s session was the presence of thirteen B team players, with Dos Santos, Nolito, Fontŕs, Riverola, Benja, Thiago, Saúl, Rochina, O. Romeu, Mińo, V. Vázquez, Edu Oriol and Bartra joining in with the first team squad.

Guardiola decided to give eight of his players –Puyol, Pique, Iniesta, Alves, Messi, Villa, Valdés and Busquets, a rest, but the last three decided to come in anyway and do some gentle recovery work, whilst Xavi and Milito also continued with their own treatment apart from the rest of the group.

Next session on Monday morning 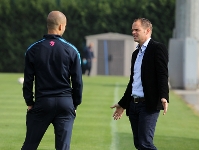 The squad will be back in training on Monday at 11.00 and Puyol will join the session, whilst the other seven rested players won’t be back until Tuesday. 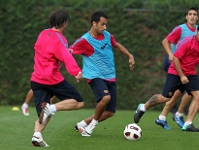 This morning’s session was visited by Frank de Boer, who played at the club between 1998 and 2003 and the Dutchman explained to Barça TV and www.fcbarcelona.cat that he is on a four day break with his family. De Boer also commented that he is currently in charge of Ajax’s youth team and explained: “I’m very busy - we train seven days a week and play a game. Whenever I am free, I get together with the Federation to discuss things connected with the national team”.