Leo Messi again took the limelight at La Romareda on Saturday, the scene of his fantastic hat trick last season, and confirmed that Zaragoza are fast becoming one of his favourite victims.

Below are some more facts and figures about Messi from the game:

- Messi is the team’s leading scorer this season with 12 games from 11 games so far.

- Saturday’s game was his 150th game in La Liga and he has scored a total of 93 goals in those games. 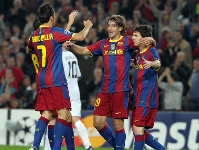 Saturday’s brace was his second in less than 72 hours, after he scored both goals in Wednesday’s win over Copenhagen.

- In twelve games against Zaragoza, Messi has bagged nine goal.

- Messi was also the player who had most shots during the game, eleven in total, of which five were on target.

- At just 23, Messi has overtaken Paulino Alcantántara and is now the club’s fifth leading all time goal scorer with 139 in all competitions. 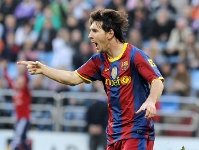 Ceuta, who meet Barça in the Spanish Cup on Tuesday, warmed up with a 3-1 win over Jaen on Saturday with goals from Javi Navarro (2) and Berrocal.