4 out of 4: the best away start to a season ever

4 out of 4: the best away start to a season ever

The win in Zaragoza was the fourth on the run and marked the team’s best ever start to a season on the road. There have been five seasons when the team won their first three away games, but never before, their first four.

After beating Racing (0-3) and winning in the Calderón (1-2) and San Mamés (1-3) , Guardiola’s team notched up their fourth straight win on the road with Saturday’s 0-2 win over Zaragoza.

One better than last year 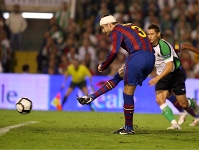 The record was nearly beaten last season when wins at Getafe, Racing and Malaga, together with three home wins made it six victories on the run before they were held to a goalless draw at Mestalla.

Last year did see the team equalling the best ever away record in a campaign – 13, the same number as they recorded the previous season. 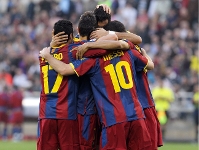 Unfortunately, the winning ways in La Liga haven’t been repeated in the two other competitions that Barça have been involved in, with a 3-1 defeat in Seville in the Spanish Super Cup and a 1-1 draw in the Champions League in Kazan. Tuesday will see the team’s debut in the Spanish Cup –away to Ceuta.