Pep Guardiola is not taking anything for granted ahead of the game against Zaragoza and has insisted that their position at the foot of the table doesn’t mean anything. The boss also spoke about the physical problems affecting Valdés and Xavi.

In his press conference ahead of the trip to Zaragoza, Pep Guardiola warned against making any assumptions about his team’s opponents: “if we go thinking about their position in the table and everything people are saying about them, then we’ll be making a mistake. Zaragoza are more dangerous now, They deserve all our respect and I’m expecting a rival from a big club, intense and aggressive”. 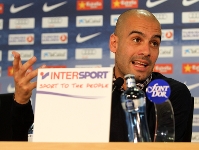 Guardiola spoke about last season’s game and claimed: “when we were there last year, it was one of our toughest games. It’s a historic ground, the fans put on a lot of pressure. The game is never over, there are teams for whom the shirt is really important and Zaragoza are one of them – one of the big teams”, adding “they were capable of coming back against Sporting with just 10 men”. 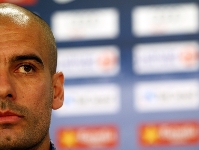 The boss talked about the physical fitness of Víctor Valdés, who missed out against Copenhagen: “if he’s travelling, then that’s because he’s recovered. He’s got back the weight he lost and he’s back in the squad”. As for Xavi, Guardiola revealed: “the doctors say that his tendons have improved and we are looking for him to make another leap forward over the next ten days”. With Xavi out, Iniesta is taking on more importance in the team and Guardiola made it clear that; “I don’t want to rest Iniesta. I’d have him playing every game. He’ll only miss a game if and when we see that he is tired or he’s got an injury”.

Happy with the team’s form

Guardiola also showed his confidence in his team: “I still believe that the team is very good, given where we have come from. Overall, I see us in a better than good moment – I’m very satisfied”. Looking forward to the rest of the season, the boss reckons his team are in for: “a hard campaign”, and that the bets way to deal with it is “to play well”. 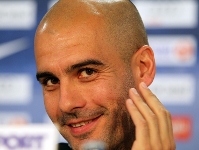 Pep Guardiola was again forced to reiterate his stand on the presence of more of his Spanish squad members in Oviedo on Friday to receive the Premis Princep d’Astúries: “I said Xavi would be there if he couldn’t make the trip to Zaragoza. I understand the Spanish fans would like to see all of the eight players who won the World Cup, but we’ve got a game at six on Saturday and I have to consider what’s best for this team and this club”.