Thiago in for Zaragoza trip

Thiago in for Zaragoza trip, but Xavi and Milito miss out

Josep Guardiola will take eighteen players to Zaragoza this Saturday: the seventeen available players from the first team squad, plus Thiago from Barça B.

Xavi and Milito are the two injured first team squad players who don’t make the trip after training apart from the rest of the squad this morning. 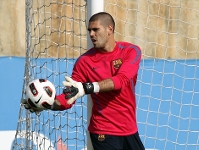 Víctor Valdés, who missed Wednesday’s game with a stomach upset, is included and this morning he trained normally with the rest of the players at the Ciutat Esportiva. Valdés’ inclusion means that Mińo, who replaced him in the squad for the Champions League match, is not included in the list for the Zaragoza game.

Thiago back in squad 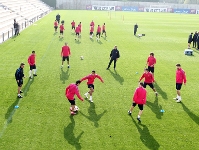 Thiago was not called up for Copenhagen game, but after starting on the bench against Valencia last week, he is again in a league squad, as Xavi is rested because of his ankle problems. Xavi will travel to Oviedo today to receive the Premi Príncep d’Astúries with eight other members of Spain’s World Cup winning squad. 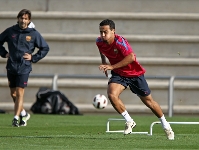