Xavi to be rested

Xavi to be rested

Xavi Hernŕndez will be rested this weekend for the game against Zaragoza and will therefore be able to assist at the ceremony of presentation of the Premis Príncep d'Astúries in Oviedo.

The technical staff, doctors and coaches met to discuss the state of Xavi’s troublesome ankle this morning and decided to rest him for this Saturday’s league game against Zaragoza.

Once the decision had been taken, Xavi was given permission to attend the presentation of the Premi Príncep d'Astúries dels Esports to the Spanish World Cup winning squad in Oviedo on Friday.

Xavi, who has been suffering with Achilles tendon problems, played for the last 20 minutes of Wednesday night’s Champions League game against Copenhagen. 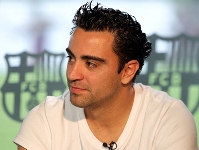