Leo Messi has scored his 31st international goal for Barēa, thus equalling the record set by Rivaldo. He also ties Alcįntara as the fifth highest scorer in club history.

Leo Messi’s brace against Copenhagen has set two new milestones. He equals Brazilian Rivaldo (1997-02) as the highest Barēa goal-getter in international competitions. And he is also now the joint fifth highest all-time scorer for the club, a position he shares with the great Paulino Alcįntara. 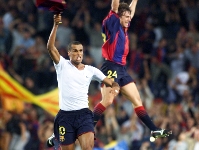 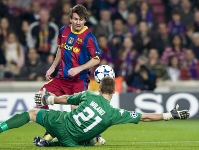 Leo Messi set another milestone against Copenhagen by becoming the fifth highest goalscorer in club history Barēa. With 137, he joins the legendary Paulino Įlcantara. Ahead of him now are only Escolą (164), Samitier (178), Kubala (196) and César (235), and it has to be remembered, he is still only 23 years old! Who knows what other records this player is capable of… 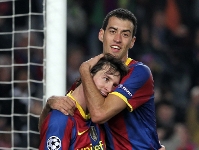 When Seydou Keita came on in the 89th minute, he was making his one hundredth appearance for the club. Since signing in the summer of 2008, the midfielder has played 65 games in La Liga, 23 in the Champions League, 6 in the Copa del Rey, 4 in the Spanish Super Cup, 1 in the European Super Cup and 1 in the Clubs World Cup.