Víctor Valdés is out of tonight’s Champions League game against Copenhagen after suffering vomiting and fever overnight. B team keeper Rubén Mińo has been called into the squad as cover.

Bad news for Pep Guardiola this morning as his number 1 keeper reported in sick ahead of the Group game with the Danish Champions at the Nou Camp tonight and the boss had no choice but to bring in the B team keeper Rubén Mińo alongside Pinto.

Ever present in the league this season

Víctor Valdés has been a regular for Guardiola and played in 73 Champions League games, conceding just 54 goals. The last European game he missed was on December 9th 2008 when he was given a rest against Shaktar with qualification already assured.

Valdes has been virtually ever present so far this season, featuring in every game and only missing out in the first leg of the Spanish Super Cup in Seville. 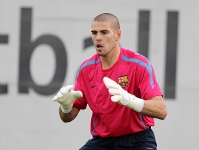