Milito out for a fortnight

Milito out for a fortnight

Gaby Milito was forced out of this evening’s training session with a muscle strain in his left thigh that will rule him out for up to two weeks.

There was bad news for Josep Guardiola this evening as the Argentinean centre back had to abandon the session with what was later confirmed as a muscle strain that will see him miss the next fortnight at least.

Milito will miss the Copenhagen game on Wednesday, the trip to his ex-club Zaragoza at the weekend as well as next week’s Cup game in Ceuta and the following weekend’s clash with Seville. 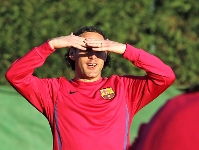