Barça were back in training this evening after their day off on Sunday and Puyol and Xavi both trained apart. The captain picked up knock on his left leg on Saturday and Xavi did some recovery work on his ankle.

The squad began work in the build up to the Champions League game with Copenhagen on Wednesday , with the CL ball used in the training session, as eight of the B team joined in.

Treatment for Xavi and Puyol 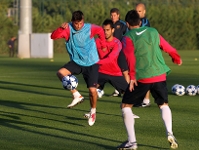 Puyol, who scored the winner on Saturday received treatment for the knock he picked up, whilst Xavi, who on Sunday complained of continued ankle pain, also got some special attention and didn’t join the rest of the group.

As has become customary this season, the session was joined by eight Barça B players - Thiago, Riverola, Ilie, Víctor Vázquez, Rochina, Edu Oriol, Benja and Armando. 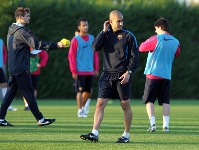 Piqué to challenge for Valdes’ place?

The session began at 18.00, but a number of players came out early, including Gerard Pique, who showed his keeping skills as the rest of the players fired in shots at him.