With Villarreal not kicking off till 21.00 on Monday night, Real Madrid took over as provisional La Liga leaders after their 1-4 win over Malaga, with Barça and Valencia a point behind.

Villarreal’s Monday night game means that it’s been a long weekend at the top of La Liga and if they beat Hercules tonight, we’ll have seen four leaders in three days. Valencia began the weekend on top, but their defeat to Barça meant Guardiola’s team led the table for a couple of hours before Real Madrid took over later on Saturday night with their win at Malaga.

Ronaldo and Higuain on the mark again

Cristiano Ronaldo and Gonzalo Higuain have chalked up 9 of Madrid’s 16 goals and on Saturday both scored twice to give Mourinho’s team a comfortable win over a toothless Malaga team who have now lost all four home games this season. Just outside the top four, Atletico Madrid saw off neighbours Getafe with a 2-0 win, despite starting without either Aguero or Forlan –Simao and Diego Costa getting the goals this time round. The game at the Vicente Calderon was a rather sombre affair with the fans and players paying tribute to their ex-player Juan Carlos Arteche, who died earlier this week and Atletico boss Quique Sanchez explained: “we wanted to win this for his widow and his children and I think we did it in a style he would have recognised as his too”.

Mallorca were unbeaten at home and Espanyol without a win on the road, so naturally enough Pochettino’s team overcame Laudrup’s at the ONO Stadium on Sunday with a 0-1 win to take them into the UEFA places. Luis Garcia scored a penalty on the half hour, but when Osvaldo was sent off for the visitors a few minutes later, Mallorca must have fancied their chances of getting back into the game, Espanyol held out for their first away points of the season though and now sit a point behind Atletico and one ahead of Seville. Seville’s Gregorio Manzan had enjoyed a good start since he took over with wins over Atletico Madrid and Dortmund, but on Sunday they were well beaten by Sporting, with Sangoy and Diego Castro getting the goals in a 2-0 win that eases Sporting’s own relegation worries and will again sound alarm bells in Seville.

No goals at the Riazor –again!

Deportivo had scored just three times before Sunday’s clash with Osasuna, who had only scored one more themselves, so it was perhaps no surprise that the two played out a goalless draw at the Riazor on Sunday. Osasuna’s keeper Ricardo was their hero after the team played for more than 55 minutes with 10 men following Camuńas’ red card. The two teams are set to meet again in the cup in 10 days time and ticket sales for that game won’t have been boosted by Sunday’s yawnfest, which leaves the two occupying 18th and 19th spots. Only Zaragoza are below them and their misery continued with a 2-1 defeat in Bilbao, which also included a sending off for midfielder Pinter. In form Fernando Llorente was again on target for the Basques, who move up to eighth, a point behind Seville who they visit next week. 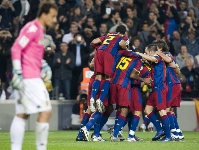 Levante and Racing on the up

Levante and Racing both enjoyed important wins over fellow strugglers on Sunday, with Pedro Munitis rolling back the years in Santander to give Racing a 1-0 win over Almeria, who drop to 17th, whilst Levante’s 2-1 win over Real Sociedad takes them to the heady heights of 12th and was their fourth game on the run without defeat.