The Barça fans are already familiar with Rubin Kazan, who the team faced last season, and also the Greeks from Panathinaikos, but although Copenhagen are not as well known, they are a strong team and certainly not to be taken lightly.

Wednesday’s rival may be unknown on the wider footballing stage, but FCK have won the Danish League for the last two seasons, they are packed with internationals and are undoubtedly Scandinavia’s best team right now.
Strong at the back

The Danish team’s strength undoubtedly lies in their defence, curiously enough the only part of the team usually with no Danish players. Swedish keeper Johan Wiland took over from Jesper Christiansen who had filled the goalkeeping position over the last few seasons and has made the number 1 spot his own. In front of him, two more Swedes, the attacking left back Oscar Wendt and centre half Mikael Antonsson are accompanied by the Czech Zdenek Pospech at right back and the Icelander Sölvi Ottesen who forms a tough and tall centre back pairing with Antonsson, but who is doubtful for Wednesday, in which case the young Dane, Mathias 'Zanka' Jorgensen will step up.

Quality in the middle

The midfield is bossed by Danish playmaker William Kvist, accompanied by the more destructive Hjalte Norregard, with Martin Vingaard playing wide right and the Brazilian Claudemir, who has immediately become a crowd favourite after arriving in the summer, on the left. The Costa Rican Christian Bolańos, one of the more skilful members of the squad, may also get some game time.

The star of the team though is undoubtedly the ex Ajax, Chelsea and Atletico Madrid veteran Jesper Gronkjaer. The 33-year-old is very much a luxury player, whose injuries have kept him from appearing with too much regularity, but is accustomed to turning on the style for the big occasions, when he is often brought inside from the wing to play just behind the striker.

The Barça defence will need to be on their guard against the speed of the Senegalese striker Dame N'Doye, who is enjoying some great form, as is the Brazilian César Santin, who is a bustling striker who scored a hat trick at the weekend against Odessa. 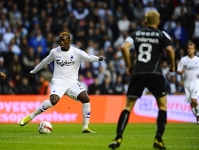