Pep Guardiola was pleased with FC Barcelona's efforts as they fought back from a goal behind to beat league leaders Valencia at Camp Nou on Sunday and believes that the result can only strengthen his team's belief.

"It was a step forward," the coach explained. "To win this type of game gives you great strength. I thought we did very well." Pablo put the visitors ahead in the opening half before Andrés Iniesta and Carles Puyol both scored to give the hosts victory in the second period.

After the win Guardiola felt that he had seen the game before. "It was identical to last year," he continued. "In the opening 45 minutes they were on top, but after that my players produced an extraordinary display and the fans understood so we have won an important game against a great side."

Looking ahead to this term Guardiola had to look back to explain how tough things would be. "It takes a lot for us to win games, nothing happens by luck," he said. "Valencia are a great team and we have to reduce our mistakes. The surprise would be to obtain 99 points like we did last season. Everyone has to remember that the other teams also play."

The Blaugrana coach then explained that he felt that the game had been a good lesson for his players. "In the first half they gave everything but could not do anything," he stated. "In the second they flew. In football a lot is the mental side. Nobody can doubt these players and today they have shown why again."

Iniesta was praised for another strong performance. "He has unimaginable ability to play in so many positions," Guardiola said. "He has it all." On Xavi and his comeback he added: "He made a great effort. We will see what is to be done. We want him to play and not to lose him. He made so much effort and we shall see how he evolves. I feel that he cannot play every week, but we shall see." 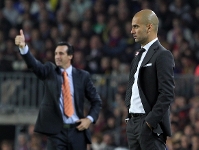 Xavi Hernández asked to be changed in the 78th minute because he felt a twinge, it was revealed after the game. The midfielder already missed the game against Real Mallorca with ankle injury and did not play for Spain last week. Seydou Keita was replaced by Éric Abidal because he had a slight groin strain.