FC Barcelona have won for the first time in five attempts in the next game after an international break as they defeated Valencia on Saturday.

The ‘FIFA virus’ has affected the Blaugrana after previous breaks for friendlies and qualifiers and there were worries that the curse could strike again when the league leaders visited Camp Nou. Barça have only won three times after the stoppage in recent campaigns as they beat Athletic Club in San Mamés 0-1 and at Real Valladolid, also 0-1, in the 2008/09 season and 0-2 at Getafe last term. This weekend the team beat Valencia to record only the fourth win ten attempts. 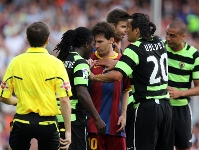 The majority of games that have followed an international break have been draws. In the 2008/09 season the Blaugrana drew 1-1 with Racing and Getafe and 2-2 with Real Betis, while last term they recorded a 0-0 with Valencia, 1-1 against Athletic Club and 2-2 versus Almería.

Last month saw the worst result after a break as Hércules visited Camp Nou and went away with a 0-2 triumph.

There will be no more international breaks until March now and everyone at Barça can breathe a sigh of relief. 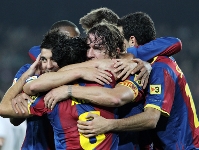