Pep Guardiola was full of praise for Valencia ahead of their visit to Camp Nou on Saturday, but warned the league leaders that David Villa will have no qualms about scoring against the club that he left in the summer.

The FC Barcelona coach is a firm admirer of Los Che and their trainer Unai Emery after their strong start to the season has seen them move into first place. "Valencia have kept the same coach for two years and it does not surprise me that they are top," Guardiola said. "Everything that they do, they do very well. They are well prepared going forward and at the back as well as being able to play both the long and short game because they have the players capable of doing that. I think that they are title contenders and we will see a good game on Saturday." 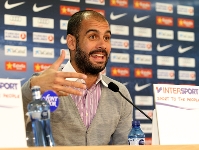 Reflecting on Barça's home form this term Guardiola refused to criticise his players and believes that results will go their way. "What is most important is that we maintain our style," he continued. "Under different circumstances we would have not conceded certain goals and we also missed too many chances going forward. What is most important though is continue to play in the same way and the rest will come."

Villa faces his former club for the first time since moving from Mestalla to Camp Nou in the summer and Guardiola thinks he will be fine. "David was calm when scoring for Spain," he explained. "Scoring goals is the most difficult thing in football. At times it depends on other small details. Villa is working hard and he has all the time in the world to adapt to the team."

Guardiola admitted that his first-team squad is small for a very long season, but has no doubt that youngsters from the youth ranks have what it takes to step up to the highest level. "When I analyse the squad I see many players who can play in different positions and that increases their potential," he commented. "To strengthen things I prefer to use the youngsters and to work with the players that I know very well because I am sure of what they will bring. Some say that one cannot win the league with Nolito and they said the same thing before about Sergio (Busquets) and Pedro. I have faith in this plan and I want to use these players."

Barça's general assembly will be held on Saturday and Guardiola was asked if anything said could affect his players. "I am an employee of the club and I do know what will happen," he stated. "I do not have an opinion. The previous board took care of us and the current one could not be better. The club members will decide those things and I hope that the assembly goes well." 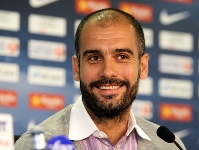