All of FC Barcelona’s international stars returned to the Ciutat Esportiva on Wednesday as the focus turned immediately to the visit of Valencia in the next league outing.

After seeing the Argentinian trio of Lionel Messi, Gaby Milito and Javier Mascherano return on Monday, the rest made it back after playing for their various countries. Spain’s six players were back along with the Brazilians after their exploits in Glasgow in midweek and Japan at the weekend respectively. 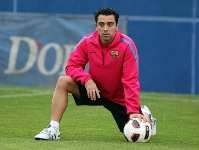 Xavi Hernández was not called up by Spain and trained away from his team-mates yet again as he continued his recuperation from the ankle injury that saw him also miss the game against Real Mallorca ten days ago.

Gaby Milito was also not part of the main squad’s session as the central defender required some recovery work after pulling out of training on Tuesday. Pedro worked with the ball as he also looks to shake off a knock.

David Villa spent the afternoon undergoing tests to see the extent of the injury that he sustained during Spain’s win against Scotland on Tuesday.

Víctor Vázquez was called up from the B team and Javi Espinosa and Carlos Castarnado were promoted from the Juvenil side to train along with the first-team squad. 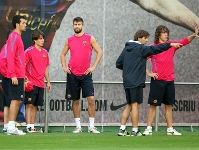 The Barça squad will return to training on Thursday at 18:00 at the Ciutat Esportiva Joan Gamper. An hour beforehand Carles Puyol will attend a press conference.