In this exclusive interview with Barça TV and www.fcbarcelona.cat, Xavi Hernandez takes a wide ranging view of the team’s prospects and remains confident about their options this season.

The Barça midfielder also talks about his recent injury and insists that the recent points dropped at home were down to missing chances.

The fans have 15 days without a game to reflect on the team’s last result. How are you enjoying the break?
"Well, I’m relaxed about it. It’s a strange moment for me, because I’m used to going off with the Spanish team, but it’s been good for me mentally. I’m also happy because my tendon injury is getting better." 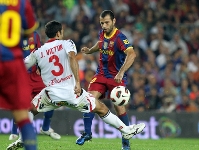 "I think we were maybe a bit short of concentration at key moments. Against Mallorca there were moments when the second goal would have finished the game off. I think we were actually playing for time a bit and then we found ourselves at 1-1. The problem was that we didn’t take our chances."

Does that mean the team were too relaxed?
"No, the thing is that when you dominate the game so much, there’s a tendency to think the goal must come, if not with this chance, then with the next one....It was like that before, we’d get two or three chances and we’d be two up. I just think we have to make a small change in the dynamic at the start of these games and that will be it."

The game against Mallorca saw the team have more shots than in all but one game so far this season – does that reinforce the idea that it’s the lack of firepower up front that’s leading to the dropped points?
"Yes, the lack of sharpness and tension, particularly from corners and free kicks. We have to improve that, because we have dropped 5 points and that can’t happen. We only dropped two all season with the draw against Villarreal last year and these five might be vital at the end of the season. Let’s hope not, but five points are a lot to drop at home."

Talking of goals and scoring them, how do you think Villa is settling in?
"He adapted straight away. We know him well from the Spanish team. He’s a very self effacing man, very much a football man who loves the game and we all know he can score goals by the hatful. He’s scoring and playing a big part in the team game, I reckon he’s a perfect signing for us, I’ve always said so and he’s proving me right."

Do you think the fans are being too impatient with Bojan? 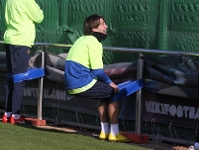 "Yes, I do, because I think he’s doing well. Much more mature than before. He’s taking on an important role within the group. He’s always very professional and looks after himself and works hard –the goals will come. He was unlucky the other day, but so were the rest of the team, not just the strikers. It seems like all the responsibility is on Bojan’s shoulders and we all have to help him. He’s scored goals all his life and I’m sure he’ll continue to do so."

Thiago and Nolito came on at a difficult moment – how do see the youngsters who are coming through? Are they ready to take on responsibility?
"Yes, I’m sure they are. We didn’t win the other day, but they did a good job when they came on. Thiago is a player who can make a career here, just like Nolito, Fontŕs, Muniesa… and we are lucky to have them. They too are lucky to have Guardiola who will give them their chances. Bringing them on when we were drawing the other day says a lot for Pep. He trusts the home grown players because he knows they don’t let him down."

You came up from the B team yourself. Does this crop of youngsters seem better prepared?
"Yes, I think they might be more competitive and mature, because they are in the second division and they won a playoff last year, also many of them are under 19 and under 21 internationals. I think they are well prepared for life in the first team."

It seems as if other teams show you more respect every season and that leads them to come into the game determined to close it down. Is that a problem?
"Yes, it is, because they don’t play the same way against us as they do against other teams. Rubin had six men in defence the other day. We know all about that though and it’s been going on for a while. What we have to do is to keep on playing our way – that’s what has brought us all so much success."

If your opponents are learning how to play you, it’s also true that the team are constantly reinventing themselves – midfielders dropping back when we attack and full backs becoming wingers.....does Guardiola demand a constant evolution? 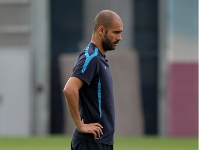 "Yes, and it’s important to look for tactical variations. Pep’s crazy! He’s always watching videos of games and he has a great staff to help him. It’s fundamental to know how we should play, if we should get down the flanks, look for superiority in the middle..... that’s what we do a lot of work on in training. Pep is crazy about tactics, he knows so much and his enthusiasm is infectious."

The pitch is being changed at the Nou Camp at the moment, has the state of the pitch affected the team’s game?
"Yes, it has. The state of the pitch is vital for our attacking game, our first touch football and our pressing. When the grass is soft and damp, that’s important for our game. It wasn’t all that good these last few games and I think we had to change it. I guess it will be better now –I hope so, because it’s vital for us."

Tomorrow, in the second part of this interview, Xavi will talk more about his own personal feelings. 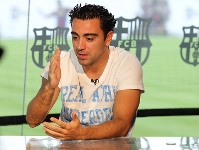