Final session of the week

Final session of the week

FC Barcelona concluded their training schedule for the week on Friday morning as nine players took to the pitch at the Ciutat Esportiva. José Manuel Pinto was joined by Éric Abidal, Seydou Keita and five youth teamers.

Again the session was sparsely attended as the international absentees meant that coach Pep Guardiola had to plan with just four first team regulars and a number of B team starlets. 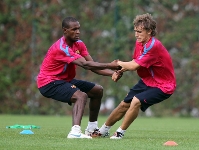 Stepping up from the B squad to pad things out were goalkeeper Jordi Masip, central defender Marc Muniesa, who is suspended for the game against Tenerife this weekend, full-back Carles Planas, midfielder Víctor Vázquez and forward Benja. The seniors and the youngsters kicked things off with 15 minutes of warm-up exercises and ball games.

Xavi Hernández and Pedro Rodríguez stayed in the gym to work on the specific recovery programmes. The playmaking midfielder missed the game against Real Mallorca and was left out of the Spain squad for the forthcoming European Championships qualifiers. Pedro, meanwhile, has a slight muscle strain that he suffered in the draw on Sunday against the Balearic Islanders. 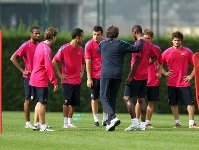 The Barça players have been given a weekend off as Pep Guardiola revealed that Friday's session would be the last and that with no first-team game they could relax and recuperate. Barça's players will return to training on Monday evening at 19:00.