Daniel Alves scored for Brazil as they beat Iran 3-0 in Abu Dhabi on Thursday evening and gave coach Mani Menezes a debut triumph.

In the same stadium where he helped Barça to win the Club World Cup the flying full-back netted a goal that laid the foundations for a convincing win by A Seleçăo. After holding a training camp in Barcelona last month this was Brazil's first match under their new trainer and they showed that he has settled in well to the role. 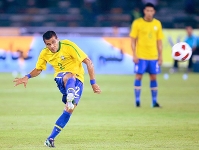 Alves gave the Brazilians the lead with 13 minutes on the clock when he steered a free-kick into the top left corner of the net. After the break AC Milan star Pato added a second and in the 90th minute Villarreal's Nilmar struck to put some icing on Brazil's cake at the end of an impressive display.

Alves played the entire 90 minutes almost exactly four years to the day that he was first called up to the Brazil squad by Dunga. 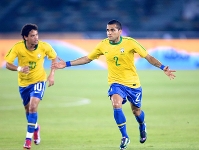 Brazil have four testing years ahead as they will defend their Copa America crown in 2011 in Argentina and then two years later will host the Confederations Cup. Then in 2014 they will welcome the 32 best countries on the planet as they hold the World Cup Finals for the first time in 64 years.