Not many at training

Not many at training

FC Barcelona trained on Tuesday morning without the majority of the squad as the forthcoming international games take precedence. Only four first-team players were available to work along with ten youth teamers.

The exodus has meant that the Ciutat Esportiva is a lot quieter this week and only a handful of players who have not been called up by their countries were present. No less than 13 stars are away on international duty, with Adriano among them despite him being injured. That has left just José Manuel Pinto, Seydou Keita, Éric Abidal, Maxwell, Xavi and Pedro.

With Xavi and Pedro unavailable as they continue to return from knocks, the rest of the players took to pitch number seven at the training complex and joined in with the Barça B starlets Masip, Sergi Gómez, Oriol Romeu, Carles Planas, Víctor Vázquez, Ilie, Tello, Edu Oriol, Martí Riverola and Rubén Rochina. After the warm-ups the players enjoyed a physical circuit that was designed by coach Paco Seirul·lo.

After the second session of the week the players will take two days holiday and return to training on Friday morning and 11:00. 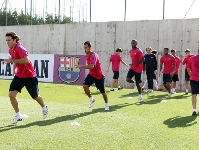 Andreu Fontŕs has been called into the Spain Under-21 squad for the European Championship Play-Off after Javi Martínez withdrew though injury. He joins fellow Blaugrana youngsters Bojan Krkic, Jeffren Suárez, Thiago and Mińo in the squad.