Víctor Valdés, Leo Messi and David Villa received the MARCA awards of the Trofeu Zamora, the Trofeu Pitxitxi and the Trofeu Zarra for the 2009/10 season.

In an act celebrated at the Ciutat Esportiva, the three Barça players received their prizes as the club took all the major awards. 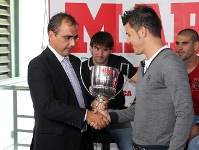 Valdés won his third Trofeu Zamora after conceding just 24 goals in 38 games, whilst Messi won the award for leading goalscorer – the Trofeu Pitxitxi with his 34 goals and David Villa took the Trofeu Zarra as the leading Spanish goalscorer for his 21 goals with Valencia. 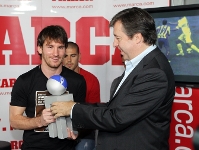 Both Valdes and the two strikers expressed their wish to repeat the honours this season, with Villa explaining: “you just try and score as many goals as you can and let’s see if Leo, or myself, or any other of my teammates can pick up the trophies next season too”.• Leo Messi, who for the second year running also picked up the Premi Di Stefano as the league’s best player, commented: “it’s true that it’ll be difficult this year, but I really want it to be one of our players who wins the ‘Pitxixi’ this season too”. 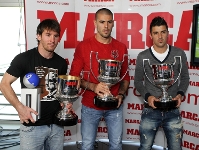 Asked as to which of his goals he most enjoyed last year, Messi replied: “it’s hard to choose from the 34, but I guess the second one against Zaragoza was the best” Messi scored a hat trick in the game at the Romareda in the 2-4 win on March 21st this year and the second one involved a typical run from midfield which left Zaragoza defenders Gabi, Jarosik and Contini in his wake. Messi himself admitted though: “in fact all of the 34 goals were special for me”.