Spanish League Round Up Week 6

Spanish League Round Up Week 6

Valencia confirmed their top spot in La Liga with a 2-1 win over Atletico Bilbao on Saturday, whilst neighbours Villarreal kept up the pressure with their fifth league win on the trot, beating Racing 2-0.

Valencia to come to Nou Camp as leaders

Valencia will come to the Nou Camp in a fortnight as La Liga leaders following their 2-1 win over Bilbao at the Mestalla on Saturday. Aduriz put Valencia ahead early on with his third goal of the season and then Vicente and Gabilondo for Bilbao both scored in injury time. Valencia have 15 points, one more than Villarreal who saw off Racing Santander with goals from Nilmar and Rossi – who now have 9 goals between them, with the Brazilian leading the pichichi table on 5. Cristiano Ronaldo is level with Rossi on 4 following his brace against Deportivo at the Bernabeu. The Galicians proved easy victims for Madrid, with Ozil, Di Maria, Higuain and De Castro in his own net making it six for Madrid, who now lie third, a point behind Villarreal, with Deportivo bottom and still winless.

Gregorio Manzano couldn’t have hoped for a better start to his time at Seville, as the team put in a great performance to brush aside Atletico Madrid. Soldado, Perotti and Kanoute were on target for their new boss and the win moves Seville up to fifth spot, two points behind Barça, whilst Atletico drop to seventh behind neighbours Getafe, who saw off Hercules 3-0. Espanyol slipped out of the UEFA spots going down 1-0 to Real Sociedad after a late own goal from Forlin . To add to Pochettino’s woes, Ernesto Galan was carried off with a broken leg.

At the bottom, Zaragoza remain winless, though the point they took at home to Sporting at least moved them above Deportivo on goal difference. Sinama Pongolle got both Zaragoza’s goals in the 2-2 draw, which they achieved after playing most of the second half with ten men following a red card for Jarosik. Racing are third from bottom on four points, whilst on five points, Levante made it three games unbeaten by grabbing a late point against Osasuna, who are themselves level on five with Sporting. Just above Osasuna are Almeria on six points following their 1-1 draw at home to Malaga. 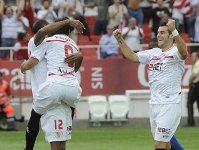