The squad were back in training this morning after Sunday evening’s disappointment against Mallorca, without the injured Xavi and Pedro and Jeffren and Bojan who are with the Spanish Under-21 squad.

Once again, Guardiola called on the B team to make up the numbers at the session, with five youngsters joining the first team squad ahead of the exodus of international players this week. Guardiola began the session with a team talk to the whole squad, including Xavi, who then went off to continue with his own recovery programme. 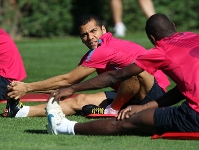 Jeffren and Bojan were both absent after being called up for the Spanish Under 21 squad alongside B team players Thiago and Rubén Mińo, whilst both Xavi and Pedro were having specific treatment for their injuries.

Five from Barça B

The players involved in last night’s game had a gentle work out, whilst the rest of the squad welcomed five Barça B players - Masip, Ilie, Carles Planas, Edu Oriol and Martí Riverola to the session. 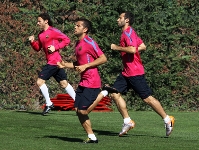 With a large part of the squad away on international duty, Guardiola has decided to hold just two more training sessions this week – on Tuesday at 11.00 and also on Friday . The remains of the squad will thus enjoy a deserved break on Wednesday and Thursday, as well as at the weekend and next Monday, with a training session scheduled for Tuesday October 12th.