Valencia will want to put their midweek European mugging by Man Utd behind them on Saturday night when Atletico Bilbao visit the Mestalla, but it’s actually been Emery’s team’s away record –three wins from three- that have taken them to the top, with just a single win and a draw at home, whilst Bilbao have proved more successful on the road than at their traditional stronghold San Mames, having taken four of their seven points from their two trips so far this season. Valencia will be without long term injuries Banega and Vicente, as well as Joaquim and Maduro. For Bilbao, Amorabieta is suspended after last week’s red against Barça, but Caparros can call on striker Toquero to back up the battering ram that is Fernando Llorente, with ex-Atletic striker Aduriz likely to start up front for Valencia alongside Soldado.

Espanyol face another Basque team earlier on Saturday when they travel to Donostia to meet Real Sociedad. A win could take Pochetino’s men into second place, but they will need to improve on their miserable away record so far this season – they’ve lost both games on the road and have yet to score – as well as overcome their ex-captain Raul Tamudo, who has been showing the Barcelona team what they are missing by already scoring three for his new club so far this season. Osvaldo is likely to be back for Espanyol, with Alvaro returning to the bench after last week’s heroics, whilst Real will look to Tamudo and Joseba Llorente up front to put an end to their three game losing streak. Saturday’s fixtures kick off with a trip to bottom club Zaragoza by Sporting Gijon. Zaragoza have yet to win a game this season and will go into the game against Sporting without injured keeper Leo Franco and ex-Barça midfielder Edmilson.

After defeat to Real Sociedad on the opening weekend of the season, Villarreal have since won four in a row and boosted by their midweek Europa League win over Bruges, they’ll be hoping to keep the pressure on Valencia, who are a single point ahead of them, with a win at home to Racing. Racing’s manager Miguel Angel Portugal reckons: “Villarreal are the best football playing team in the league after Barça”. At the other end of that spectrum, Real Madrid desperately need to convince their home fans with a good performance against Deportivo, who will be without the injured Valeron, on Sunday and have yet to score on the road this season.

Following his successful start in midweek against Dortmund, Gregorio Manzano makes his Sanchez Pijuan debut with a tough game against Atletico Madrid who are sweating on the fitness of Kun Aguero, whilst Reyes is suspended and misses the trip back to one of his many ex-clubs. In other games, Osasuna take on Levante in Pamplona, Almeria entertain Malaga in the Andaluz derby and Getafe host Hercules, who could conceivably move into the top five if they can beat Michel’s team. 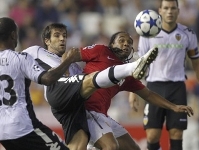