The squad went through their penultimate training session before Sunday’s game against Mallorca this morning and the good news for Guardiola was the presence of Adriano, who trained with the rest of the players after missing the midweek trip to Kazan 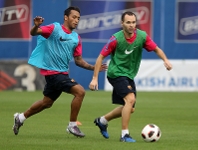 With just the injured Xavi missing from the squad, Guardiola put the players through their paces as they prepared for the third league game of the season at the Nou Camp on Sunday and with the upcoming international break on the horizon.

Adriano, who has been training apart from the rest of the squad all week following his thigh injury against Bilbao at the San Mames last week, was this morning back into the swing of things and trained normally with the other players.

Two from Barça B

Guardiola was able to work with 18 of his first team squad as well as Thiago and Nolito from Barça B, who repeated Friday’s experience and made up the full 20 man session. 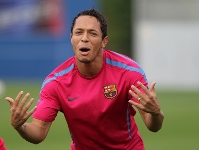 As usual on the day of a home game, the squad will train tomorrow on the Nou Camp pitch: at 11.00 behind closed doors.