Xavi the only absentee in training

Xavi the only absentee in training

Barça were back in training this morning as they prepared for Sunday night’s game against Mallorca at the Nou Camp. Xavi, with tendon problems, was the only player missing from the session. 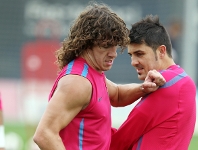 After Thursday’s rest day, following the draw in Kazan on Wednesday night, the squad trained this morning at the Ciutat Esportiva Joan Gamper ahead of Sunday’s La Liga clash with Mallorca.

The whole squad were present for training, with just Xavi Hernadez, who was left out of Spain’s squad for next week’s internationals, missing as he worked to recover from his tendonitis problems.

Adriano trained apart from the rest of the players accompanied by a physio, as he continues to fight to get back from the thigh injury he picked up in San Mames which kept him out of the Kazan game.

Three from Barça B

Three Barça B players joined the 18 first team players in the session - Nolito, Martí Riverola and Thiago. The session consisted of a warm up, ball control exercises and circuit training. 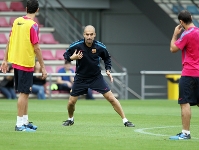 The squad return to the Ciutat Esportiva at 11.00 on Saturday for another training session behind closed doors, after which Josep Guardiola will hold a press conference.